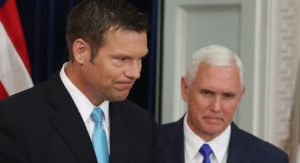 A federal judge has turned down a watchdog group’s demand that President Donald Trump’s controversial voter fraud commission be forced to conduct a privacy assessment before gathering data on millions of American voters.

Kollar-Kotelly said the commission and a White House information technology office did not appear to qualify as federal agencies and therefore did not trigger the requirement for a privacy impact assessment.

The voter fraud panel is headed by Vice President Mike Pence and Kansas Secretary of State Kris Kobach, a leading figure in the crusade against illegal voting that many experts say is extraordinarily rare.

A key issue in the suit filed by EPIC and at least three other suits brought by other organizations and individuals is Kobach’s June 28 request for states’ publicly-available voter roll information, including felony conviction information and partial social security numbers.

The panel initially asked states to upload that data to a site hosted by the Defense Department, potentially implicating federal laws covering executive branch agencies. However, the panel is now having the information collected by the White House itself, effectively avoiding the impact of those federal statutes.

“Given the factual circumstances presently before the Court—which have changed substantially since this case was filed three weeks ago—Defendants’ collection of voter roll information does not currently involve agency action,” wrote Kollar-Kotelly, an appointee of President Bill Clinton.

“Under the binding precedent of this circuit, entities in close proximity to the President, which do not wield ‘substantial independent authority,’ are not ‘agencies’ for purposes of the [Administrative Procedure Act.] On this basis, neither the Commission or the Director of White House Information Technology—who is currently charged with collecting voter roll information on behalf of the Commission—are ‘agencies” for purposes of the APA, meaning the Court cannot presently exert judicial review over the collection process,” the judge added.

Kollar-Kotelly also noted that “The disclosure of a Privacy Impact Assessment may very well be in the equitable and public interest, but creating a right to such disclosure out of whole cloth, and thereby imposing an informational burden on the Commission where none has been mandated by Congress or any other source of law, is not.”

“This ruling is a major victory for government accountability, transparency and the public’s right to know about the integrity of our elections processes,” the panel’s vice chairman said in a statement.

“The President formed this commission to identify ways to enhance the American people’s confidence in the integrity of our elections. The Commission requested this publicly available data as part of its fact-gathering process, which is information that states regularly release to political candidates, political parties, and the general public. We look forward to continuing to work with state election leaders to gather information and identify opportunities to improve election integrity,” Kobach added.

EPIC President Marc Rotenberg said the group will press on with the litigation.

“EPIC will push forward. The Commission cannot evade privacy obligations by playing a shell game with the nation’s voting records,” he said.

The privacy advocacy group also pointed to a passage in the opinion where Kollar-Kotelly indicated she expects the panel to abide by various statements that officials made in connection with the suit, such as pledges to only seek publicly available data and to anonymize the information collected before releasing it.

Last week, Kollar-Kotelly denied injunctions against the voter fraud commission sought in a pair of other suits focused primarily on access to the panel’s meetings and records. The ruling Monday, by contrast, primarily addressed the privacy issues raised by the commission’s data collection.

Democratic lawmakers and civil rights groups have denounced the commission as an effort to discourage minority voting and to try to vindicate an unsubstantiated claim by Trump that millions of voters were cast illegally in favor of his opponent Hillary Clinton in the 2016 presidential election.